The following year in 1863 she enlisted in the army as a nurse. She was through the siege of the Army of the Potomac. The experiences of the army life always remained dear to her. It was a great delight to her on several occasions to recount her experiences of those days at Grand Army Encampments.

In 1886 she married John J. Gosper of Geneva, Illinois. Four years later they removed to Lincoln Nebraska. During more than forty years she was a public spirited citizen, taking special pride in the growth of the city and the
knowledge that she had a part in that growth.

She was an active member of the Womens Relief Corps and prominent in the work of St. Paul’s Methodist Church of which she was a member in its early days.

During the years in Lincoln, Mrs. Gosper found time for here one favorite pursuit, that of
helping the poor. Until her closing years she was ever on the alert for the poor and needy. She never gathered her information second hand but would go in person to the county commissioners
for her list. Many times she did neglect social and business obligations for a visit with some family of the poor. She gave much to charity.

In the early 1870s when Lincoln boasted a population of 2,000 people, Mrs. Gosper established
a millinery shop that grew as the city grew for twenty-five years. She was also a builder of Lincoln, having built no fewer than five houses. In every instance she gave her own supervision to the work. She was a woman of dominant will and energy.

She passed away at age 84 on February 1, 1914. A son Frank Graham and a niece Mrs. Bell of
Lincoln, and a brother Henry Polley of California survived her. She is buried in Wyuka Cemetery in Lincoln with other Civil War nurses. 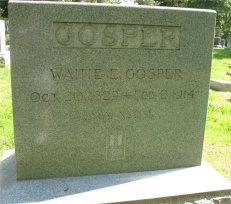 When North Platte Tent #23 organized in 1929, they chose the name Waittie E. Gosper.

– Most of this information is taken, almost word for word, from the DUV Department History
written 1978 by Cleo Schmidt, Department Bicentennial Chairman.