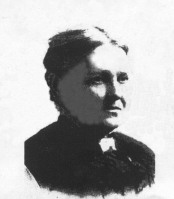 Sarah D. Proctor was the second wife of (widower) John Gillespie, who enlisted in
Co. C, First Nebraska Infantry. Sarah and John Gillespie were married in September, 1860, and when Lt. Gillespie was given the post of Quartermaster and Commissary at Plum Creek, NE, his wife accompanied him to the field and was herself enlisted into Co. C, First Nebraska Infantry, as an Army Nurse. She left that service in June, 1862.

The Gillespie family moved to Lincoln after John became Territorial Auditor and was appointed by the State Legislature as one of the three commissioners to lay out the town of Lincoln.

Emma B. (Gillespie) Susong, daughter of John and Sarah Gillespie, served as Tent 7’s first Tent President , 1919, and as the eighth State president 1926-27. All three members of the Gillespie family are buried in Wyuka Cemetery, Lincoln, Nebraska.