General notes on the biographies:
· WRC (Woman’s Relief Corps) is explained in the Introductory page.
· GAR is also explained in the Introductory page.
· Most sources are not cited in the individual biographies,
but are available upon request. · A few phrases or sentences are direct quotes from old
sources. · Please be aware that when more than one source was found,
a discrepancy in dates or spelling was almost sure to be found. Thus no spelling or date
is absolutely certain. · If you have knowledge to share on these or any other
woman in Nebraska who served in the Civil War, please contact the Department President

Catherine Keife was a native of the County Dublin, Ireland. She was born about 1830. In 1856 she married Edward Donovan “probably in New Orleans or the Chicago area.”
The fall of 1867 they came to Oreopolis which was one and a half miles from Plattsmouth. In 1878 they moved the house they had built to Plattsmouth..

Her husband Edward Donovan “was among the first to volunteer” enlisting April 1861 in Co. A, 1st Nebraska Infantry. After the war his regiment was sent to the
northwestern frontier and was discharged July 1866 with him a Captain. In 1867 he joined the regular army, 41st Regt later consolidated into the 24th, on the northwestern frontier and in Texas. He resigned 1878 to be an accountant with the Burlington & Missouri River Railway Company in Plattsmouth.

Kate/Catherine (Kiefe) Donovan died in 1882. It is assumed she was buried in Oak Hill Cemetery, Plattsmouth, Nebraska, since her husband was buried there.

Elizabeth T. Ellenwood of Nebraska was one of the Army Nurse’s names read at the Memorial Services at the National WRC Convention in 1917 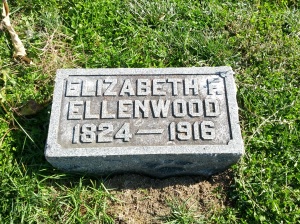 Mrs. Ellis was one of the army nurses attending
the Nebraska Department WRC Convention in 1894.

Elizabeth Ann Ferguson of Neligh, Nebraska was one of the Army Nurses whose name was read during the Memorial Services at the National WRC Convention in 1924. Elizabeth Ferguson was President of the Neligh WRC Corps #59 in 1905.

Anna Hahn of Nebraska was one of the Army Nurses whose name
was given in the Memorial Service at the National WRC Convention
in 1912.

Marie Haines was a Civil War Nurse. This information comes from the DUV application of her daughter, Nora Bolling.

In 1945 Nora Haines Bolling joined Betsy Ross Tent No. 1, Omaha, as a Real Daughter. Her father Adam Haines joined Co. K, 75th Indiana. He was a member of the Joe Hooker which was the GAR Post at Shelton, Buffalo County, Nebraska.. Her application
also stated that her mother, Marie Butler, was a Civil War nurse.

Elizabeth Mahle was a Civil War nurse. She was given recognition at the 1904 Department WRC Convention as an ex-Army Nurse and “gave an interesting story of some of her experiences in the dark days of the rebellion.” She went with her husband to Ft. Kearney, Nebraska, and served about two and a half years as a nurse. She received a pension. The 1909 Department WRC reported her death as that of another Army Nurse.

Elizabeth Vowel was born February 1841 in Indiana, of parents who were both born in Germany. Her husband said she was “of Putnam County, Indiana.”

She married Gottleib Mahle (1836-1904) about 1860 in Jasper County, Iowa. They came to Nebraska in 1860, and he stated in 1882 that he had “assisted Bird Vowel to plant the magnificent orchard on what is now the Loveless farm”. In 1882 he was a farmer, post office London in Nemaha County. London was a little village near Brownville. They had no children.

Mr. Mahle enlisted October 1862 in Co. C, Second Nebraska Cavalry as a Pvt, and served eleven months. Reenlisted October 1863 in Co. A, First Battalion Nebraska Cavalry as Bugler. Transferred January 1865 to Co. C, combined with First Regiment Nebraska Veteran Cavalry. Discharged July 1, 1866. He had been crippled from a horse falling on him when in service. This service was on the Nebraska frontier “to guard the mail routes and the settlers from the depradations of the savages.”

Mrs. Mahle accompanied him to Ft. Kearney on his second enlistment, as a laundress. The frontier at that time was one of “hardships and privations where now is all peace and plenty”, with vast herds of buffalo, and Pawnee, Cheyenne and Sioux Indians. She was soon appointed a nurse. “She cared for the sick and wounded soldiers, the members of the garrison being frequently engaged in bloody conflicts with the murderous bands of savages.” Two vivid memories for her were the Plum Creek massacre, and the visit of Gen. William T. Sherman to Ft. Kearney in 1866.

When the Ben Thompson WRC Corps #130 of Brownville was instituted in January 1891she was the Senior Vice President, and was a faithful member. The 1909 WRC Department Journal said, “Her loving disposition endeared her to all.”

– Andreas, A. T, History of the State of Nebraska; 1882, published by the Western Historical Company, Chicago, page 1153. The prior page has a description of the remarkable Loveless farm which was formerly owned by Bird Vowel. Roster records.

No further information has been found.

Mrs. Parkinson was a Civil War nurse. She was one of a committee of army nurses appointed at the 1894 WRC Department Convention.

At this Convention a Frances E. Parkinson was a Delegate from S. P. Chase Corps #87 of Madison. This was the only place this surname was seen in this journal, though Mrs. Parkinson could have been one of those attending who was not one of the convention’s voting membership.

Julia A. Prouty was a volunteer Civil War nurse. Her name was on the list of Army Nurses in the 1889 and 1890 National and Department WRC Journals, as a Volunteer. Her death was reported as an army nurse in the 1908 National WRC Journal.

– NEGenWeb: Tombstone Project- Andreas, A. T, History of the State of Nebraska; 1882, published by the Western Historical Company, Chicago.

Kate Shepherd was not a Civil War nurse. She served as a spy or scout for the 65th Illinois. This information is from the newspaper account of the 1897 annual GAR Reunion.

“Mrs. Shepherd of Grand Island, who was at the front, spoke for a short time. She served as a scout with the Sixty-fifth Illinois regiment. She ran the blockade at Memphis,Tenn. For three years and six months she was on the field and was never suspected for she was known as the wife of a rebel captain. She was finally struck by a piece from a shell and she carries a silver plate under her skull now as a result, ‘free silver’ as she expresses it.” She was speaking at the evening campfire. In addition, “Mrs. Kate Mussy Shepherd, a union spy who was with the Sixty-fifth Illinois, spoke at the Illinois meeting yesterday.” The internet introduction mentioned: “The lady spy from Grand Island, who was elected to serve as an officer of her state G. A. R headquarters.” At the Nebraska GAR Reunions, the veterans who had served from other states each had their own state headquarters.

M. J. Welch was a “Regular” Civil War nurse. She was listed under Army Nurses in the 1889 and 1890 National and Department WRC Journals, as a Regular.

No further information has been found.

She was a member of the WRC Corps in Lincoln, Farragut No. 10.

The 1900 Census shows Sarah Zimmerman, widow, born PA, on U St, Lincoln, Nebraska. Her age and birthdate are not clear in the census microfilm, but age might have been 54. In the household were daughter and sons: Frances born May 1876 in PA, Percy born Oct. 1879 in NE, and Carl born May 1884 in NE. She seems to be the one whose death notice was given February 3, 1920. How this fits in with Civil War service is not known.

The Neligh WRC corps, John C. Fremont No. 59, reported: “One deceased army nurse’s grave was also decorated” when decorating those of the veterans on Memorial Day, 1893.

In Andreas’ 1882 History is the following: “Upon the departure of one of the regiments, a lady whom the papers incited was the lineal descendant of one of the fearless women of Revolutionary times, donned soldier’s attire throughout and took passage as one of the “boys.” Her sex was undiscovered during the trip to St. Joe, but when the boat left that port and proceeded down the river the romance had an end, for she was discovered by her husband and sent back to Omaha, where it is said she still lives.”

– Andreas, A. T, History of the State of Nebraska, 1882, published by the Western Historical Company, Chicago, page 703.

The 1897 Memorial Day report of Raymond WRC corps, Kane No. 181, stated “One army nurse was buried here and her grave was decorated.”

The WRC Department’s Pension and Relief Committee reported in 1912, “One army nurse was reported to me as not drawing a pension, who lives at Shurbert, Neb.”