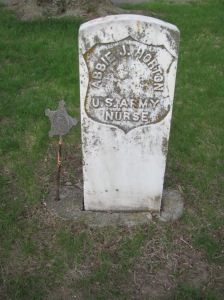 Abbie J. Horton was a Civil War nurse. Her stone is government issue and reads: Abbie J. Horton, U. S. Army Nurse. A 1933 WRC History lists a monument [stone] “dedicated to a Civil War Nurse.” An older mother, she went to nurse her wounded son in the hospital and then continued nursing. She received a pension.

She married Hosea B. Horton (about 1819-1884) on February 14, 1840 at Bellows Falls, Vermont. He first came to Nebraska City about 1858. He was known as a speculator and seemed to have various interests some of which lasted few years; shoemaker by trade, went to the mines, came back, had an interest in the Nebraska
City Quartz Mill Company, formed a partnership making boots and shoes to order, engaged in freighting contracts between Salt Lake City and Fort Collins. He was president of the Zetagathian Literary Society in 1862, a radical Republican, delegate to several Republican territorial conventions, a member of the Methodist Church, and a Mason.

Known children were: Edward, who enlisted in the Civil War and was wounded; Charles B. who was in the 2nd CO Cav., in Omaha in 1890, a division sup’t of Western Union Telegraph Company when he died October 1906; and a daughter Mrs. James A. Flemming.

Her obituary said son Ed had enlisted in the Civil War, was wounded and taken to Fort Monroe for treatment. When Mrs. Horton learned of this she enlisted as a nurse and cared for him until he was restored to health. She then became a regular nurse and
remained in the service until the close of the war, serving without Senator Van Wyck.

Mr. Horton sued for divorce February 1863 stating that she was a non-resident of Otoe County. Whether this was before she came to the state, or after she left to care for their wounded son, is not known. Evidently it was not granted, as they and a 21 year old daughter were on a farm a few miles northwest of Nebraska City in 1870; Mr. Horton had bought a farm in 1869. Mrs. Horton left about 1895 to live with her sons and daughter.

She was regarded as “a wonderfully bright woman, a writer of more than ordinary ability.. Her poetry was really good, and her stories always interesting.” “Older readers of The News will well remember her many contributions to this paper.”
This is from her obituary.

– Otoe County Pioneers: a Biographical Dictionary,
1964, by Raymond E. Dale, Part V, pages 1271-72. This work is well referenced. Most information is from this.

– Obituary: Nebraska City News, February 1, 1910, 2 articles, one of which describes her Civil War nursing and pension.